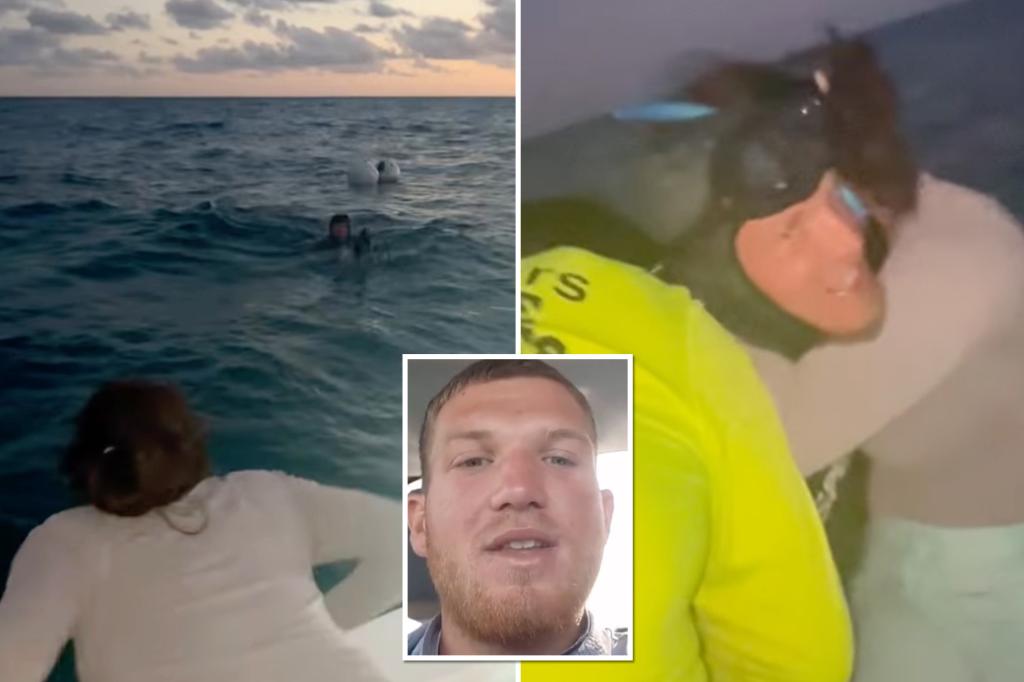 A 21-year-old Florida free diver was caught in the powerful Gulf Stream current, which swept him into shark-infested waters – before his elated family found him several hours later amid shrieks of “there he is!”

Conditions soon deteriorated and the group set out to head to shore, where Gartenmayer decided he wanted to get one more dive in.

“So I ran back out and that’s where everything started happening,” he told the outlet.

All of a sudden, Gartenmayer was swept out by the current and dragged down 150 feet, where he managed to hold his breath for about two minutes before surfacing.

He said he swam about a mile to a channel marker, while clutching a piece of bamboo that had been floating in the water.

Meanwhile, his friends and family fretted about his whereabouts.

Gartenmayer’s mom Tabitha said she got a distressing call from her ex-husband.

“‘Tab, something’s wrong with Dylan! They haven’t seen him in an hour,’” she told the NBC station. “And from that moment on, this feeling came over me, just like this, and I couldn’t breathe. I couldn’t talk.”

The family quickly mobilized and set off in search of their missing loved one, along with the US Coast Guard, as they raced toward his last known location.

“We had the coordinates that were given to us, but he obviously wasn’t on those,” Tabitha told NBC Miami.

Meanwhile, Gartenmayer said he caught a glimpse of the Coast Guard in the distance.

“I could see their blue lights, the helicopter going, doing their grid pattern. My bamboo had started drifting away from me,” he said.

Gartenmayer and his cousin Priscilla documented the drama in a series of gripping social media posts, Insider reported.

“I knew that the further and further I got out, the less of a chance I’d be found, and it was taking me out deeper and deeper,” Gartenmayer said.

Gartenmayer said he cut off three mooring balls and created a raft to “conserve body heat” while sharks swam in the area.

“By some miracle, my parents and everybody else on board my grandfather’s boat had ended up driving and basically landing right on top of me,” he said.

Gartenmayer said he waved his spear to catch their attention and that his pal Joel Cruz finally spotted him.

Priscilla shot several TikTok videos that have gone viral, including one in which the family and friends yell in excitement when they spot the stranded diver.

“There he is!” they are heard screaming.

In a follow-up post, Priscilla captioned a video of her exhausted and freezing cousin being pulled onto the boat and into the arms of his rescuers.

“We’ve lived in Key West for many generations,” she wrote. “And we have fallen family members who we let to rest at sea and we really feel like they protected him.”

The Coast Guard checked Gartenmayer’s vitals and found that he had a “low core temperature, but that’s about it,” Priscilla wrote.

“He spent the night in his bed, safe and sound. We are so grateful,” she added.

A Coast Guard official said the service was grateful that Gartenmayer was recovered safely.

“Too often missing diver cases don’t have positive outcomes, and the circumstances of this case didn’t forecast for one,” Lt. Cmdr. Elizabeth Tatum, a search and rescue mission coordinator, told NBC Miami.

“Sunset, weather conditions and Dylan’s outfit were playing against us in this case, but his foresight to lash mooring balls together to make him a bigger target in the water was smart,” she added.