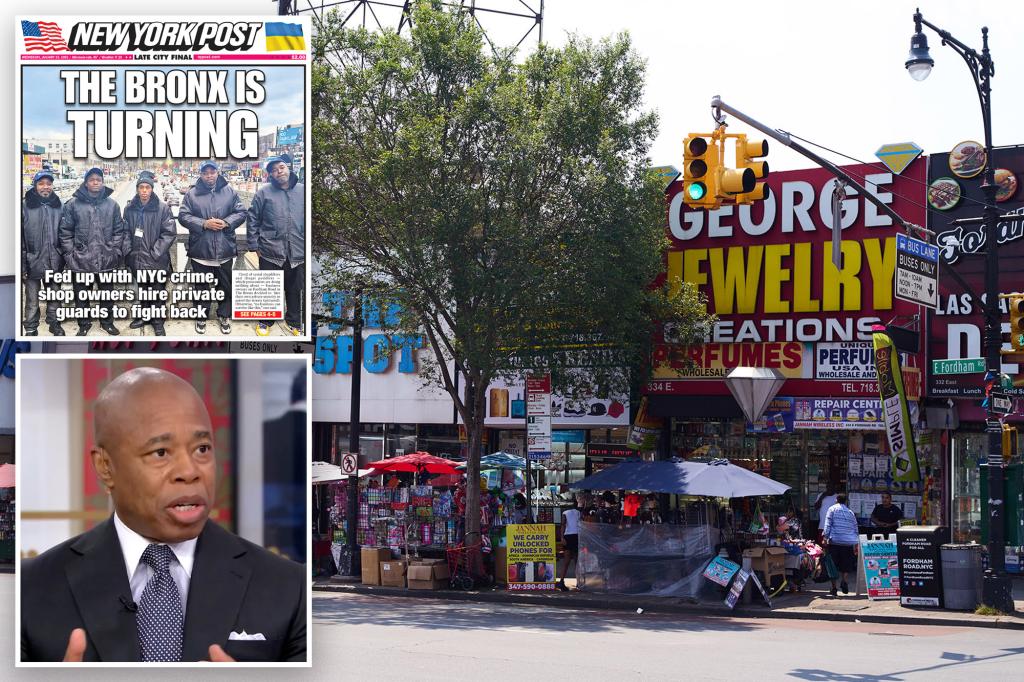 Mayor Eric Adams applauded a group of Bronx-based merchants so fed up with shoplifters that they hired private security guards to police Fordham Road, while also ordering his own police force to “arrest” and “prosecute” suspects.

“We see the front page of the New York Post here this morning — I’ll hang it up — talking about how there are some here in the Bronx shopkeepers that there’s a sense of feeling the police aren’t doing enough, that they’re fed up with NYC crime,” reporter Jonathan Lemire began, showing Adams The Post’s front page story.

“Shop owners are hiring private guards to fight back. Is that a wise strategy? What more can be done here?” asked Lemire.

“It is a wise strategy, because I say this over and over again, not only must the numbers reflect safety, but people must feel safe,” remarked Adams.

“People must feel safe and we must make sure that businesses are safe in the city and that’s what the NYPD is doing. But we have a real problem with recidivism in the city,” added the mayor.

The new unarmed, five-person “Ambassador Program” is charged with monitoring the busy shopping area along Fordham Road from Jerome Avenue to Washington Avenue Wednesday through Saturday.

Retail theft has gotten so bad in the district that an American Eagle store recently called it quits, closing its store after experiencing upwards of 20 thefts a day, according to local representative, Democratic Councilman Oswald Feliz.

Meanwhile, thousands of grocery and retail store owners across the city also banded together to form Collective Action to Protect our Stores, or CAPS, to demand stiffer penalties for theft and new protections for workers.

Adams even hosted a major summit on retail theft last month with big name stores like Target and Starbucks in attendance, as well as members of the NYPD, the city’s five district attorneys and state Attorney General Letitia James.

City Hall said a report is expected to be released within the coming weeks detailing a plan for how to stop the shoplifting scourge.

“It breaks my heart when I see people walking into stores, or stealing whatever they want,” Adams added when asked a second time about The Post’s report during a WABC radio interview with host Sid Rosenberg Tuesday.

“Law enforcement must arrest and prosecute and hold them accountable.”

Adams said cracking down on recidivist criminals tops his list of demands he’ll push Albany lawmakers to focus on this year.

“I got to cross that bridge again this year when I go to Albany and lean into those recidivist problems that we’re having,” he said on WABC.