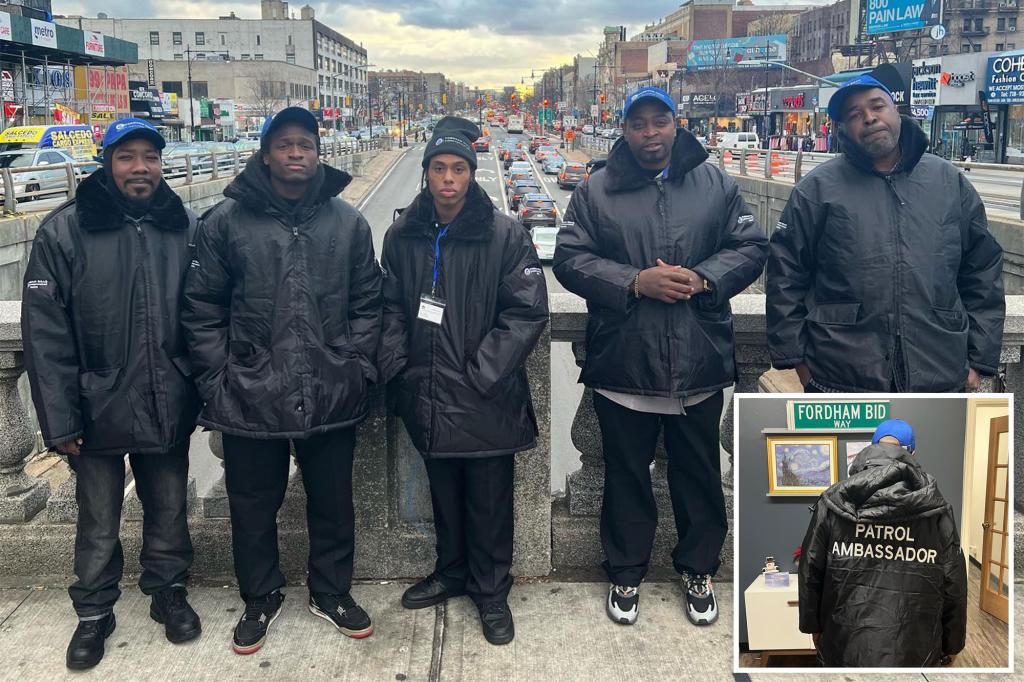 A group of Bronx merchants got so fed up with rampant crime in New York City that they took matters into their own hands — hiring private security guards to keep order on a bustling commercial strip.

The five-person  “Ambassadors Program” is being run by the Fordham Road Business Improvement District Wednesdays through Saturdays between 2 p.m. and 6 p.m.

The unarmed ambassadors’ mandate is to patrol the borough’s busiest shopping district, along Fordham Road from Jerome Avenue to Washington Avenue.

They will meet and greet merchants and customers to act as a deterrent to thieves but also serve as additional eyes throughout the Fordham neighborhood to report any suspicious, unsafe activity or criminal acts, according to the Fordham BID.

Bronx Councilman Oswald Feliz, who represents the Fordham Road shopping corridor, said more has to be done to crack down on serial bandits that are “harming local businesses and local jobs.”

But he hopes this will be a start.

“A few months ago, American Eagle left Fordham Road, due to constant thefts — 20-plus in one day,” Feliz told The Post.

“No business can survive like this. And we’re concerned about this having a domino effect on other businesses, which are also facing similar challenges. I’ve spoken with employees who have been threatened with pepper spray and much more, and they are quitting. No one can work under those circumstances.”

He added, “I’m still learning about the program, but I hope it helps.”

“Our businesses are the cornerstones of our commercial corridors and neighborhoods that support local jobs, provide local goods and generate billions in economic development,” said Wilma Alonso, president and CEO of the Fordham Road BID.

“And to ensure that our businesses succeed and thrive, we have to make sure we are listening to their concerns, which includes an emphasis on public safety. We hope this new program can serve as a model for other business corridors around the city to amplify and create additional resources for those who work, shop and live in our communities.”

Politicians including Mayor Eric Adams — and even civil rights activists such as the Rev. Al Sharpton — are demanding that state lawmakers approve laws to rein in career thieves who are damaging businesses and forcing merchants to put products under lock and key.

Gov. Kathy Hochul said she wants to tweak the cashless bail law to give judges more discretion to detain dangerous defendants with long prior records pending trial but has thus far not been able to effect much change.

The Post previously reported about Illegal vendors and gamblers taking over parts of the Fordham Road commercial strip thanks to a new city law that moved enforcement responsibilities from the NYPD to the Department of Consumer Affairs, which lacks the authority to confiscate goods — or even demand identification from street hawkers.

Fordham Road BID officials emphasized the ambassadors will assist the local police, not supplant them and Councilman Feliz said he wants to boost spending for the NYPD to put more cops on the beat.

The patrol ambassadors make $18 an hour.

A spokesman for the Fordham Road BID said it is funding the security initiatives through its assessment levied on merchant members, though it also receives discretionary grants from the City Council through Feliz.

The business group is looking for a more permanent funding source to continue the ambassadors’ program beyond February.

“The Patrol Ambassador Program is great. It’s helpful for the businesses to have another security presence other than the NYPD. There are incidents on the streets as well, and the ambassadors are a helpful deterrence tool,” said Daniel Quinones, manager of Jimmy Jazz on Fordham Road.

Sign up for Devine Online, the newsletter from Miranda Devine

Merchants said theft isn’t’ the only concern, though — violent crime is a big worry.

Earlier this month, an eight-month pregnant woman was blasted in the leg by a stray bullet while walking on Grand Concourse near East 192nd Street in Fordham Manor.

The Post also recently reported that grocers in other parts of The Bronx are cracking down on serial thieves by slipping steel chains through the handles of laundry detergent bottles and securing them with padlocks — a new low in the shoplifting scourge across the Big Apple.

The lock-and-chain strategy was hatched by the United Bodegas of America in the wake of spiking thefts, explained Fernando Mateo, the organization’s president.

“The justice system is just not cooperating, and it’s getting to a point where you either have to padlock every item that has to be stolen, or you have to fight back,” Mateo told The Post earlier this week.

“And if you fight back you take the risk of going to jail for protecting your property.”

Curtis Sliwa, founder of the Guardian Angels volunteer patrols started back in the 1970s, called the Fordham Road private security patrol is nothing more than “patchwork.”

“This patrol is not going to work. They can’t put their hands on anybody. They have to call 911. It all goes back to the police. You need more police.”

Meanwhile, Francisco Marte, head of the Bodega and Small business Association said, “Private patrols are not enough. There’s only so much we can do. What we need is more police. We don’t have consequences for criminals. We have to prosecute criminals, process them and not give them desk appearance tickets.”