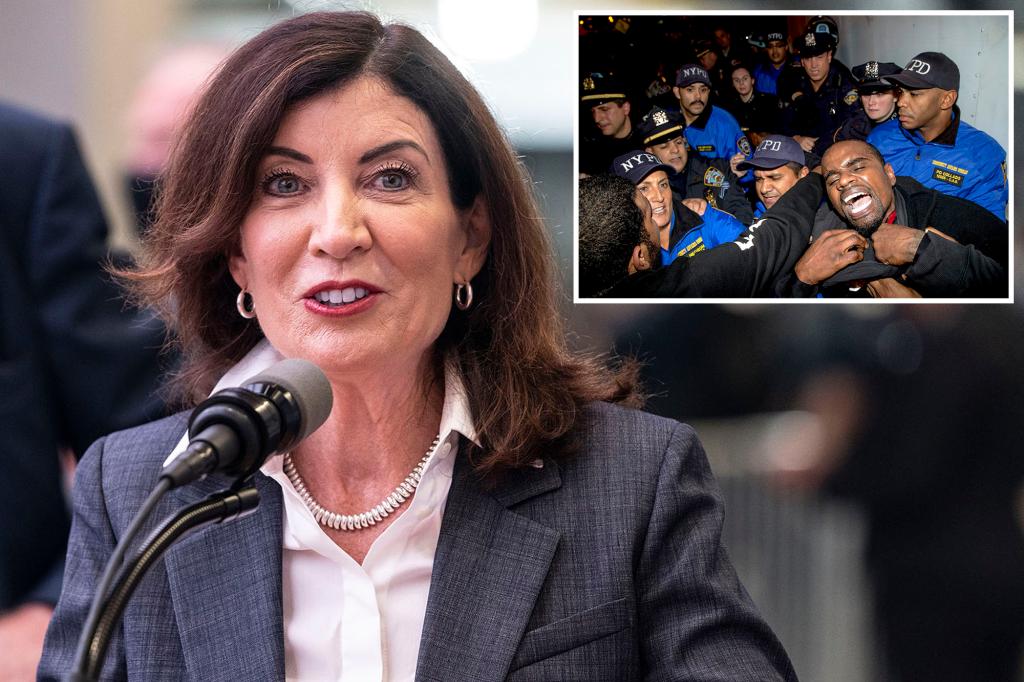 ALBANY — Fresh off a historic defeat at the hands of lefty fellow Democrats opposed to her pick to lead New York’s top court, Gov. Kathy Hochul said Tuesday she opposes the idea of making it easier to sue individual police officers.

“I don’t support the repeal of that,” she said after dodging the “qualified immunity” issue for months while campaigning for a full term in office last year.

“[What] I do support is stopping the denigration of people who take an oath to protect society,” she added.

The comments come ahead of a Wednesday rally where progressives will begin a fresh push for a bill repealing qualified immunity — which shields cops and government officials from civil liability — across the state.

In New York City, lawmakers took that protection away from cops in 2021 despite protests by NYPD supporters.

The state legislation, sponsored by state Sen. Robert Jackson (D-Manhattan) and Assemblywoman Pamela Hunter (D-Syracuse), neither of whom immediately provided comment Tuesday, has failed to advance in either chamber since being introduced in early 2021.

“This is wanting to make sure we protect constitutional rights that are violated by public servants. Period,” Hunter told The Post last year.

But opponents warn limiting qualified immunity statewide could have dire consequences amid rising crime for rank-and-file members of law enforcement who want to do their jobs without worrying about getting sued.

“We want to stop the deterioration of public safety in New York, we need to stop piling new burdens and penalties on police officers. We need every elected official to speak up and say – unequivocally – that they’ll support police officers when we do the job in good faith,” Police Benevolent President Patrick Lynch said.

Hochul has talked big in recent weeks about combatting rising crime by overhauling criminal justice reforms like controversial limits on cash bail through the state budget due April 1 with details expected in legislation expected sometime this month.

“We hope Governor Hochul’s comments today are a sign New York’s leaders are finally realizing that the policing pendulum has swung too far away from common sense,” Lynch said.

While running for the Democratic primary for governor last year, Hochul said in a questionnaire submitted to Manhattan’s Jim Owles Liberal Democratic Club she “supports efforts to increase accountability and transparency in law enforcement,” which suggested she might support the repeal of qualified immunity.

A spokeswoman said ahead of the November election against Republican Lee Zeldin that she would “review the legislation if it passes both houses” without saying where Hochul stood on the issue.

Her approach to the testy topic is now changing as she pivots towards the political center by backing centrist Judge Hector LaSalle, changes to bail reform and now sticking up for qualified immunity over the objections of progressives.

“I think the governor realizes that we’re kind of at a crossroads right now and the repeal of qualified immunity would only immobilize the police and at the same time, encourage criminals,” National Police Foundation President Michael Palladino said.

The newly-inaugurated governor noted Tuesday that state police are having trouble hiring people during a press conference at an Albany “Crime Analysis Center” where law enforcements agencies cooperate with state help to solve shootings and other crimes.

“We’re not ever going to sacrifice individual rights, but also protecting life and property is critically important to us. So I’m going to continue focusing on changing the attitudes around our law enforcement,” she said.

When pressed, Hochul said she would not give a “straight answer” before explicitly saying she opposes the idea of repealing qualified immunity, which she then suggested protected honest cops while leaving room to punish those who abuse their power over private citizens.

“Communities need to know that they can trust law enforcement to not cross that line. That’s important to me. And I’ll happily call out anybody who does and say ‘you’re shaming your profession. Don’t do that,’” she said.

“But the vast majority are hardworking individuals who just deserve more respect than they’ve been getting the last few years,” she added.