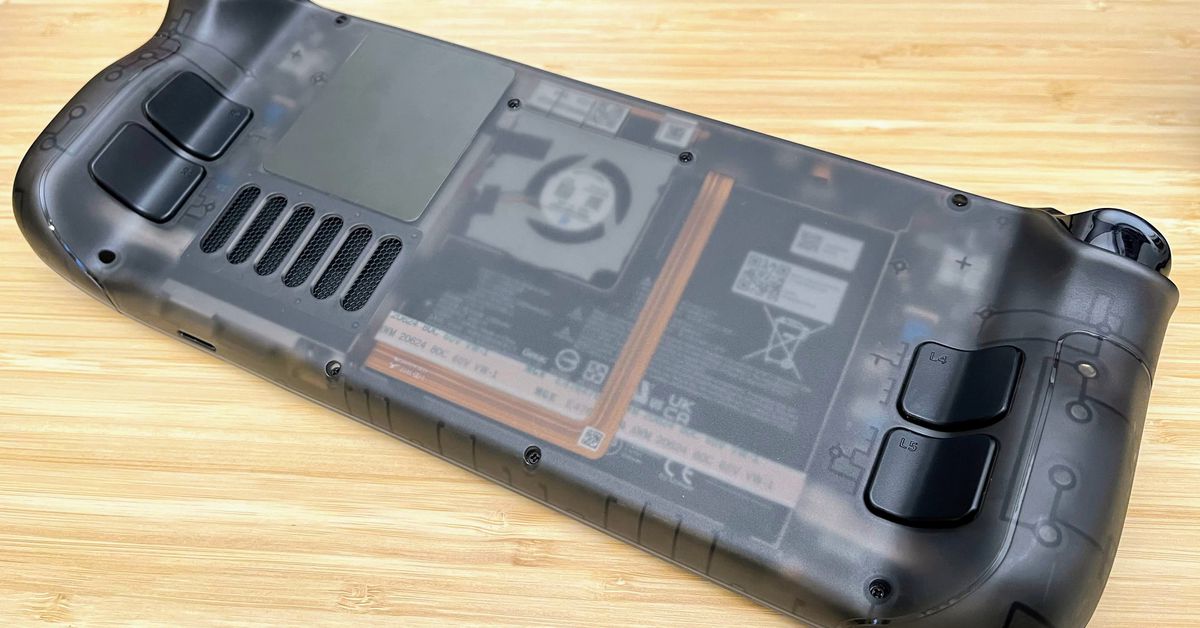 I thought I was buying JSAUX’s transparent backplate for the Steam Deck for the bragging rights. Transparent gadgets are fun! But you know what’s cooler than seeing inside your Steam Deck? Having a Deck that runs cooler, too.

I’m happy to report that after spending $30 on my very own JSAUX PC0106 Transparent Back Plate for Steam Deck, my original skepticism didn’t pan out. Not only does it look great, its built-in aluminum heatsink actually does help manage the $400 handheld gaming PC’s heat. And at just eight Phillips-head screws and a little prying to pop off your original backplate, it’s an easy mod to do.

Originally, I figured a sheet of aluminum that simply sits atop the Deck’s electromagnetic interference shield wouldn’t make a real difference in degrees Celsius. And yet it does. I consistently saw the Deck’s CPU and GPU cores running one, two, three, occasionally even four degrees Celsius cooler in Shadow of the Tomb Raider.

That’s not even the best part. Ever since I installed the JSAUX backplate, I’ve been treated to quieter gaming sessions — because the new passive cooling means the Steam Deck’s noisy fan doesn’t have to spin as much!

I’ve seen it spin 500RPM, 600RPM, even 900RPM slower when I’m pushing the Deck to its max. One example: I saw the fan top out at 5674 rotations per minute with the aluminum cooling plate while downloading a 35GB game to the internal SSD — without it, it topped out at 6475RPM.

It’s a bigger difference than you might think in terms of noise level since the Deck’s miniature cooling fan gets way more noticeable near max velocity.

Even in lighter fare like Trails in the Sky, which consumes as little as 6W of total system power, the cooler can make a difference. While it doesn’t stop the fan from spinning up, I was able to game for longer before it started spinning at all. I’ve seen that in more intense games, too.

Just don’t expect a difference in framerate: in the reliable Shadow of the Tomb Raider benchmark, I only saw a 1 fps improvement and sometimes got the exact same score. And don’t expect it to fix the whine of the Delta fan if your Deck has one of those — it’s nice that it doesn’t spin up as often or as fast, but I could still hear the whine after playing a while.

The backplate does get hot while you game, but I don’t think it’s a big deal. I did measure over 126°F (52°C) after running benchmarks for 20 minutes, but it wasn’t enough to burn my finger, and I had to stretch to even reach it. Meanwhile, the Steam Deck’s grips stay nice and cool.

So, what’s to complain about? Let’s start with the accessories JSAUX includes. You get a cheap screwdriver, a shitty pry tool that didn’t work, and three whole sets of back buttons in the box — that way, you can replace Valve’s shallow paddles with taller, springier ones if you want. But while they do give you the option of a shorter or longer throw, I quickly abandoned them when I discovered they slightly reduced my grip on the Deck and dug into my pinkies, too.

The third set of back buttons is supposed to be identical to Valve’s, and I’m happily using them now on my personal Steam Deck — but on WM Leader’s Steam Deck review unit, they don’t quite seat properly and cause one of the back buttons to constantly stay pressed.

I think it might be because the JSAUX backplate doesn’t fit as perfectly as the original. While it largely feels great, with a nigh-identical texture to Valve’s black plastic, screw holes that all line up, and clips that snap neatly into place, a couple things do seem off. Like how my SD card now brushes the edge of the case when I insert it or the sharp plastic points near the triggers that are smoother on Valve’s model.

Mainly, JSAUX’s thermal interface is a little too thick, causing a slight bulge, and I had to screw Valve’s self-tapping case screws tighter than I like to counteract that — which seems to have a side effect of cinching down too much on the back buttons, too.

Listen, you don’t need one of these. The Steam Deck runs fine without it. But I’m very happy with my purchase: I now have a handheld that runs cooler and looks great, and it only cost me $30 and 15 minutes of my time.

The JSAUX Transparent Back Plate lets you see some of your Steam Deck’s insides — and keeps your fan from working as hard to cool down the handheld gaming PC.

There is one reason you might want to wait, though: JSAUX is about to make a new version in the classic atomic purple (and green), giving it a little bit of that classic Nintendo flavor. I’d take that over a Dbrand SwitchDeck skin any day.