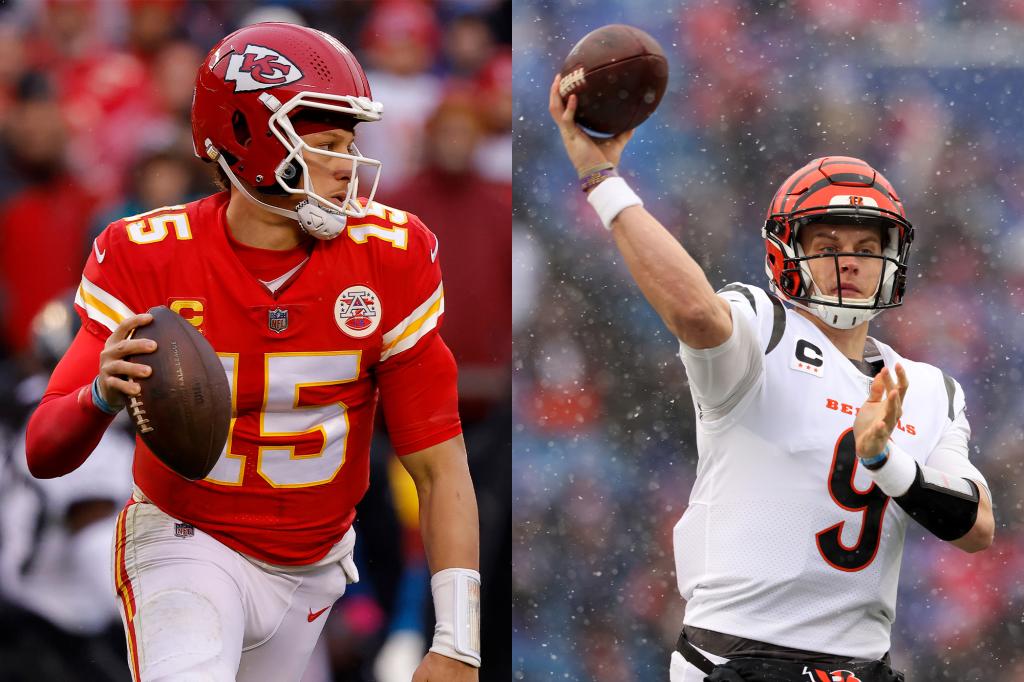 Vivid Seats is the New York Post’s official ticketing partner. We may receive revenue from this partnership for sharing this content and/or when you make a purchase.

The hometown, No. 1 seed Kansas City Chiefs are once again facing off against the Cincinnati Bengals on Sunday, Jan. 29, at 5:30 p.m. in a rematch of last year’s AFC Championship Game.

And, just like last year, the game will take place at Kansas City’s Arrowhead Stadium.

Once again, Andy Reid’s Chiefs come in with home-field advantage, but there are complications. Star quarterback Patrick Mahomes rolled his ankle in the team’s 27-20 win over the Jacksonville Jaguars in the Divisional Round of the playoffs.

That being said, in his Monday media session, coachReid said that Mahomes is “gonna play.”

As for Zac Taylor’s visiting Bengals, they’re coming off an impressive 27-10 win over the Buffalo Bills behind the play of quarterback Joe Burrow and standout receiver Ja’Marr Chase and running back Joe Mixon.

Will Kansas City overcome Mahomes’ injury? Can the Bengals repeat and reach the Super Bowl for a second season in a row after overcoming a 21-10 halftime deficit in last year’s AFC Championship game?

We can’t say for sure, but we do know the best way to find out is live.

And it doesn’t matter if you’re a Chiefs or Bengals fan — both teams will need all the support they can get to get them to the big game.

To make that happen, you can still snatch last-minute tickets.

At the time of publication, the lowest price we could find on seats was $253 before fees on Vivid Seats.

Lower-level seats start at $450 before fees.

All prices are subject to fluctuation.

Although Mahomes was briefly removed from the Divisional Round game, the Chiefs didn’t entirely fall apart without their MVP quarterback.

Backup QB Chad Henne, 37, stepped up in Mahomes’ place and led a 98-yard touchdown drive to help the team’s victory over Jacksonville.

If you’d like to fill in the blanks and read more about the game, just click here.

All the NY Post’s Chiefs’ news stories can be found here.

The biggest news story from the Bills-Bengals game didn’t happen on the field; it took place in the announcer’s booth.

Former Dallas Cowboys quarterback failed to impress fans with somewhat juvenile commentary that included him describing a play as a “little tush push.”

Hoping to hear more about Romo’s off night on the mic? You can find more on his eventful evening here.

Click here to check out all of the NY Post’s Bengals coverage.

How can I watch the Chiefs-Bengals game?

As is standard, the AFC Championship game will be broadcast on CBS, as nearly all AFC games are.

Tracy Wolfson and Jay Feely are set to serve as reporters; Gene Steratore is the rules analyst.

For those that prefer to stream, you’ll be able to catch the two AFC heavyweights on NFL+ or Paramount+.

With very little football remaining for the first half of 2023, might we interest you in some of the biggest concerts that might be coming to a city near you in the next few months?

Here are just five of our can’t-miss favorite acts embarking on nationwide tours this year.

Not enough live music for you?

If that’s the case, we recommend taking a look at our list of the 52 biggest concert tours of 2023 here to help ease your troubles.