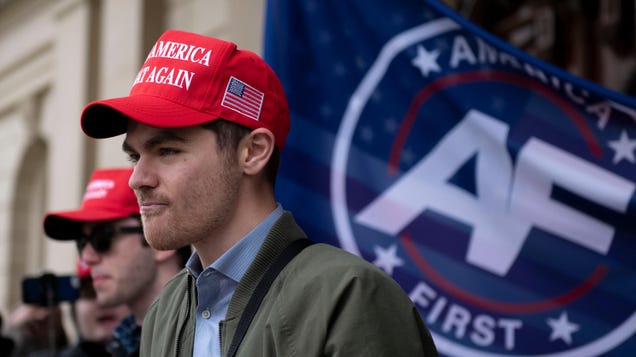 The 24-year-old white supremacist Nick Fuentes has been at the center of multiple far right campaigns, including multiple stop the steal rallies. His online fan group have executed multiple digital harassment campaigns against critics.

After just one day after being reinstated back on Twitter thanks to owner Elon Musk’s blanket pardon of hate figures, white nationalist and anti-Semite Nick Fuentes has once again been kicked off the platform.

Twitter reinstated Fuentes on Tuesday without notice or fanfare. Fuentes is known for his live streams where he goes off about offering praise of Adolf Hitler, denying the holocaust, and promoting great replacement theory, all while compl aining about how mainstream conservatives have not embraced his brand of hate politics fully enough. The hatemonger has gained even more prominence online as he’s been seen as wingman to disgraced rapper Ye, formerly Kanye West. His fans, a community called “groypers,” spread his messages on social media even though Fuentes has been exiled from most major platforms.

After getting his account back, Fuentes didn’t post too much to his main profile in the few hours he was active. However, Hannah Gais, a senior researcher with the Southern Poverty Law Center, wrote that overnight Fuentes hosted a Twitter Space where he praised both Hitler and domestic terrorist Ted Kaczynski, AKA the Unabomber.

Twitter has not made any statement about Fuentes’ or any other far right accounts being reinstated or banned. Gizmodo reached out to the company for comment, but since the platform no longer has a communications team, we will likely not hear back.

Fuentes’ mistake was immediately going all in on his white nationalism. Other neo-Nazis have maintained their accounts long after the Musk-owned platform reinstated them over the last few months. Stop the Steal organizer and fellow far-right personality Ali Alexander also had his account banned on Wednesday. Alexander’s account was reinstated earlier this month.

Other far-right accounts on Twitter have already started stumping for Fuentes and Alexander’s profiles to be reinstated. Fuentes himself has taken to his own cloistered community on Telegram to also ask for his account back. Musk has been known to take advice directly from people on the right, like conspiracist writer Andy Ngo, about accounts to ban. This has included antifascist researchers and other folks who have extensively reported on the far-right.

There has been a rash of hate speech on Twitter ever since Musk took power, which researchers have linked to examples of real world violence. On Wednesday, a group of German Jewish students alongside anti-hate speech organization HateAID filed a lawsuit against Twitter Tuesday, complaining that the company had been failing to remove anti-Semitic content. The groups are arguing they have the legal right to force Twitter to comply with its own terms and conditions against allowing hate speech on the platform.