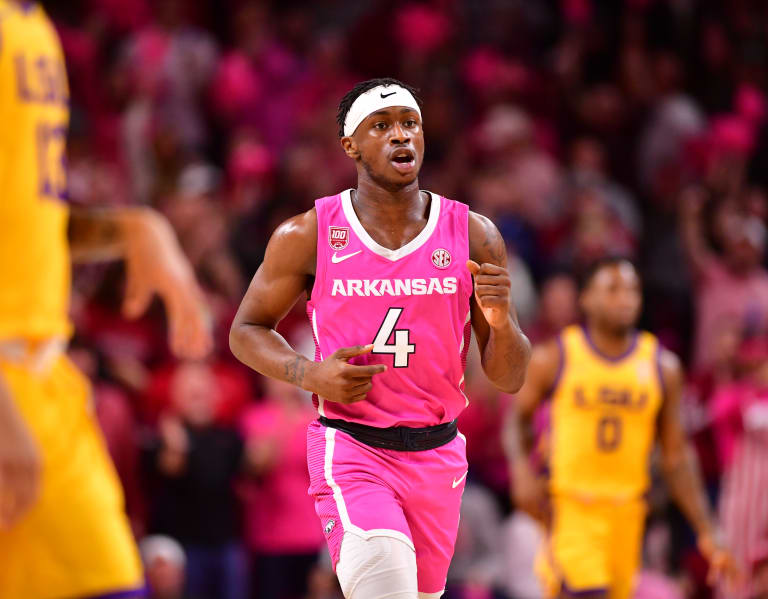 FAYETTEVILLE, Ark. — It is not exactly a secret that the Razorback men’s basketball team has underperformed in the absences of sophomore forward Trevon Brazile and freshman guard Nick Smith Jr. As of the conclusion of Tuesday’s action, the Hogs sit in the bottom half of the league standings at 3-5, characterized by a four-game skid in January.

It was hard to acknowledge any of the bright spots during the middle of the month, but with the squad on a two-game winning streak, it is increasingly obvious that the offensive production of junior guard Davonte Davis has picked up significantly since SEC games began.

It is Davis’ defense that always draws praise from head coach Eric Musselman, but his emergence as a two-way player has been remarkable. He led the team in scoring during Tuesday’s 60-40 win over LSU, marking the fourth time he has achieved the feat in eight conference clashes.

Davis is averaging nearly 14 points per game, compared to 7.5 in non-conference play, recording double digits in seven contests. He has posted 16 points six times, including each of the past five.

“He’s playing how we expect him to play and a little better,” freshman guard Anthony Black said after the win Tuesday. “Knocking down shots, commanding the offense most of the time, being a leader. Just being Devo, playing with a lot of energy. And of course on defense just taking their best player out of the game every time and making them look like they don’t usually look.”

Unsurprisingly, Davis’ shooting percentages are better during league play in every category. His 45% from the field is more than 11 percentage points better than non-conference outings, his 37.5% from 3-point range is twice as good as his first 10 games and his free throw percentage is almost 82, up from 76.

Davis has also shown a stronger prowess as a passer and a rebounder, averaging almost a full assist and 2.5 rebounds more in conference games.

“The biggest thing — and my wife said it two days ago — his shot selection has been unbelievable,” Musselman said. “He’s playing the point guard with Anthony. Tonight he’s telling us to slow it down, get a good shot and milk the shot clock. That’s maturity on his part, it’s him understanding the system, understanding what we’re looking for down the stretch.

Musselman said his players have done a great job of getting in the gym outside of practice since the rough patch hit, and perhaps chief among them is Davis.

“I think I got here at 7:06 and he was either finishing or close to finishing shooting,” Musselman said Saturday after the 11 a.m. tipoff against Ole Miss. “His work ethic has been extremely consistent on a daily basis on his own, and I think he’s really focused.”

Davis and the Hogs will take their first winning streak of 2023 to Waco, Texas, this weekend for the Big 12/SEC Challenge against the No. 17 Baylor Bears, whom they last met in the 2021 Elite Eight. The game is scheduled to tip off at 3 p.m. Central on ESPN and on the ESPN app.