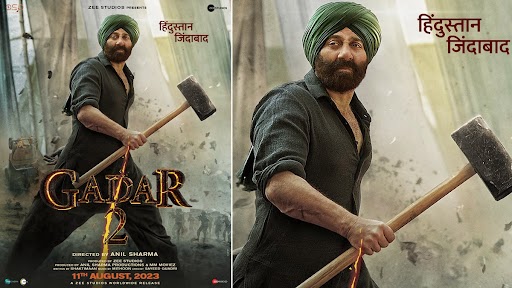 Bollywood actor Sunny Deol’s Gadar, which shattered box-office records 22 years ago, is returning with its sequel. The first poster from the sequel titled Gadar 2 was unveiled on Thursday and it shows an intense Tara Singh, played by Sunny, holding a hammer. The film has also set its release date as August 11, 2023.The Sunny Deol and Ameesha Patel-starrer created an insurmountable stir in Bollywood when it released in 2001 and clashed against Aamir Khan’s Oscar nominated Lagaan. Gadar 2 First Look Poster Out! Sunny Deol and Ameesha Patel’s Film to Hit the Big Screens on August 11, 2023 (View Pic).

Actor Sunny Deol stated: “Gadar – Ek Prem Katha has been an eminent part of my life, personally as well as professionally. Tara Singh from Gadar isn’t just a protagonist but went on to become a cult icon that defied all odds and crossed all boundaries for his family and love. Collaborating with the team after 22 years was a creatively enriching experience.” Gadar 2: Sunny Deol, Ameesha Patel to Reprise Their Role of Tara Singh and Sakina in Anil Sharma Directorial; Check Out the Motion Poster!

The Poster Which Was Released:

Sharing his joy over the first poster launch, director and producer Anil Sharma said: “Gadar – Ek Prem Katha isn’t my film but it’s people’s film and dynamically shifted the paradigm of the Indian film industry. It went on to become a cult icon wherein people breathed Tara Singh and Sakina’s love story. We are absolutely thrilled to launch the first poster.”

(The above story first appeared on LatestLY on Jan 26, 2023 01:13 PM IST. For more news and updates on politics, world, sports, entertainment and lifestyle, log on to our website wmleader.com).