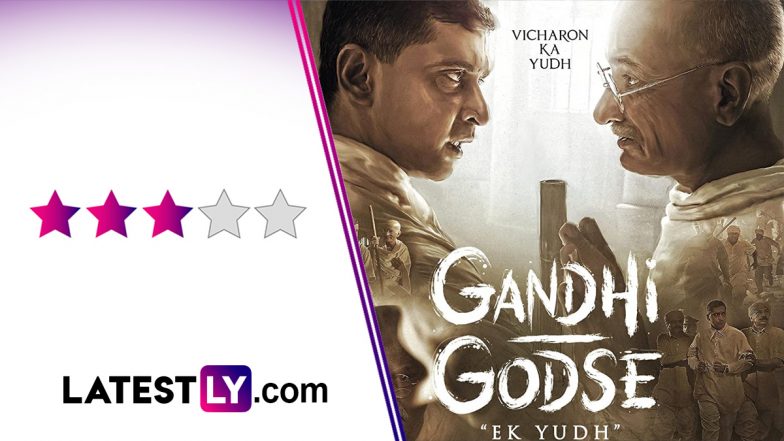 Gandhi Godse Ek Yudh Movie Review: Sometimes good intentions alone don’t make a good film, especially when the product is driven only by naivety and an urge to deliver a solid viewpoint. National Award-winning filmmaker Rajkumar Santoshi’s recent offering Gandhi Godse Ek Yudh can possibly fit in that bracket. Santoshi returns to direction after 10 long years to offer a fictionalized scenario where the father of the nation Mohandas Karamchand Gandhi comes face to face with Nathuram Vinayak Godse to know each other’s ideologies better in order to discover (as indeed to overcome) their perceived limitations as human beings first. On paper, the idea seems promising, but when put on celluloid things get lost in translation in multiple ways. Gandhi Godse-Ek Yudh: Rajkumar Santoshi Breaks Silence on the Controversial Film, the Director Says ‘Watch It With an Open Mind’.

However juvenile or simple this film may appear, at the heart of it lies a rebellious idea and the purity of intentions that shine. Also strike as well are the sincere performances of Depak Antani as Gandhi and Chinmay Mandlekar as Godse. The alternative course of history where Gandhi survives the assassination attempt and Godse later shares the same cell as Gandhi is interesting as indeed intriguing. The reimagined history though is neither equally effectively structured nor does it stay gripping by the makers. There’s so much one must sit through to arrive at the conclusion–the literal clash of ideologies–between Gandhi and Godse. The controversial one-nation theory (akhand Bharat) and the much-debated versions of secularism stay exposed as Gandhi and Godse confront each other. Sadly, most of the face-off remains naive and juvenile to say the least. Gandhi Godse Ek Yudh Makers File Official Complaint to Joint Commissioner of Police Satynarayan Regarding Death Threats and Complaints.

In a powerful confession, however fictionalized, Gandhi admires Godse’s patriotism, his academic approach to things and his sharp intellect as indeed Godse admits how he was moved by Gandhi’s ability to unite the nation and his staunch principles that made him bow down to him before firing the gunshots at him. These are powerful scenes delivered with conviction by the said actors, but the sequencing of events and their robust structuring lack intensity and the much-required depth. Santoshi portrays everything in large brushstrokes where nuances are missed and the fiery debate loses its grip. Gandhi Godse – Ek Yudh Trailer: Rajkumar Santoshi’s Film Sees Mahatma Gandhi and Nathuram Godse at Ideological Loggerheads (Watch Video)

The first half of the film is as confusing as it is gripping before the reimagined history takes time to sink in. Santoshi ensures that you have multiple questions in your head that get answered to establish the two prime characters with their truest essence. The message here is as strong as it is noble–one man’s terrorist is another man’s revolutionary and vice versa and yet there are elements that remain black-and-white and they could really be worked upon. But largely the screenplay remains insipid even if you are willing to accept the film with its inherent limitations. The second half is as stretched as it it is dull. AR Rahman’s background score does evoke patriotism, and devotion as indeed it captures the seriousness of the events but fails to leave a lasting impact.

All in all, Rajkumar Santoshi’s alternative reality is an interesting opportunity partly lost thanks to the naive screenplay, even if the protagonists offer sincere performances. The only plus is that one can’t miss the noble intentions of the maker and the simplicity of the narrative that could have been offered in a more striking way.

(The above story first appeared on LatestLY on Jan 26, 2023 12:04 PM IST. For more news and updates on politics, world, sports, entertainment and lifestyle, log on to our website wmleader.com).