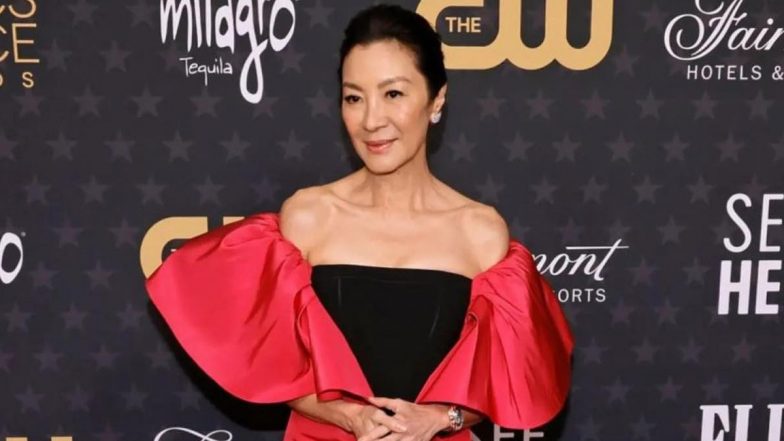 The Everything Everywhere All at Once actor Michelle Yeoh who received her first Oscar nomination for Best Actress on Tuesday, also earned a special feather in her cap. She is the first actress of Asian descent to achieve this feat. As reported by People, Yeoh told Deadline following the Oscar nomination news: “I think what it means to me is all those Asians out there go, ‘You see, it’s possible. If she can do it, I can freaking well do it as well.’ That is the most important thing. I’m very ordinary. I just work very hard. There are so many brilliant actresses and actors out there who know that they have a seat at the table. All they have to do is find an opportunity and get there.”Oscars 2023 Nominations: Everything Everywhere All At Once, The Banshees of Inisherin, Tár Lead the Nominees for 95th Academy Awards, RRR Gets Nominated in Best Song – See Full List.

The Academy Awards have been criticized in the past for nominating primarily white actors. However, this year, several Asian actors have nods from the Academy including Yeoh’s costars Ke Huy Quan and Stephanie Hsu, as well as Hong Chau for The Whale. This marks the highest number of Asian acting nominees recognized by the academy in its history, according to Variety. Oscars 2023: Everything Everywhere All at Once Tops 95th Academy Award Nominations With 11

Yeoh has picked up several honours including a Golden Globe for best actress this year. She became only the second Asian actress to win the award (Awkwafina won the award in 2020 for her role in The Farewell). She also has taken home best-actress accolades from the Saturn Awards and Hollywood Critics Association for her role in the movie and was nominated for outstanding lead performance at the Gotham Independent Film Awards. She is also up for the best lead performance at the Film Independent Spirit Awards, which will be held on March 4.

Everything Everywhere All at Once stars Jamie Lee Curtis, who also received a nod for her performance at the Academy Awards. The 95th Academy Awards will air on March 12.