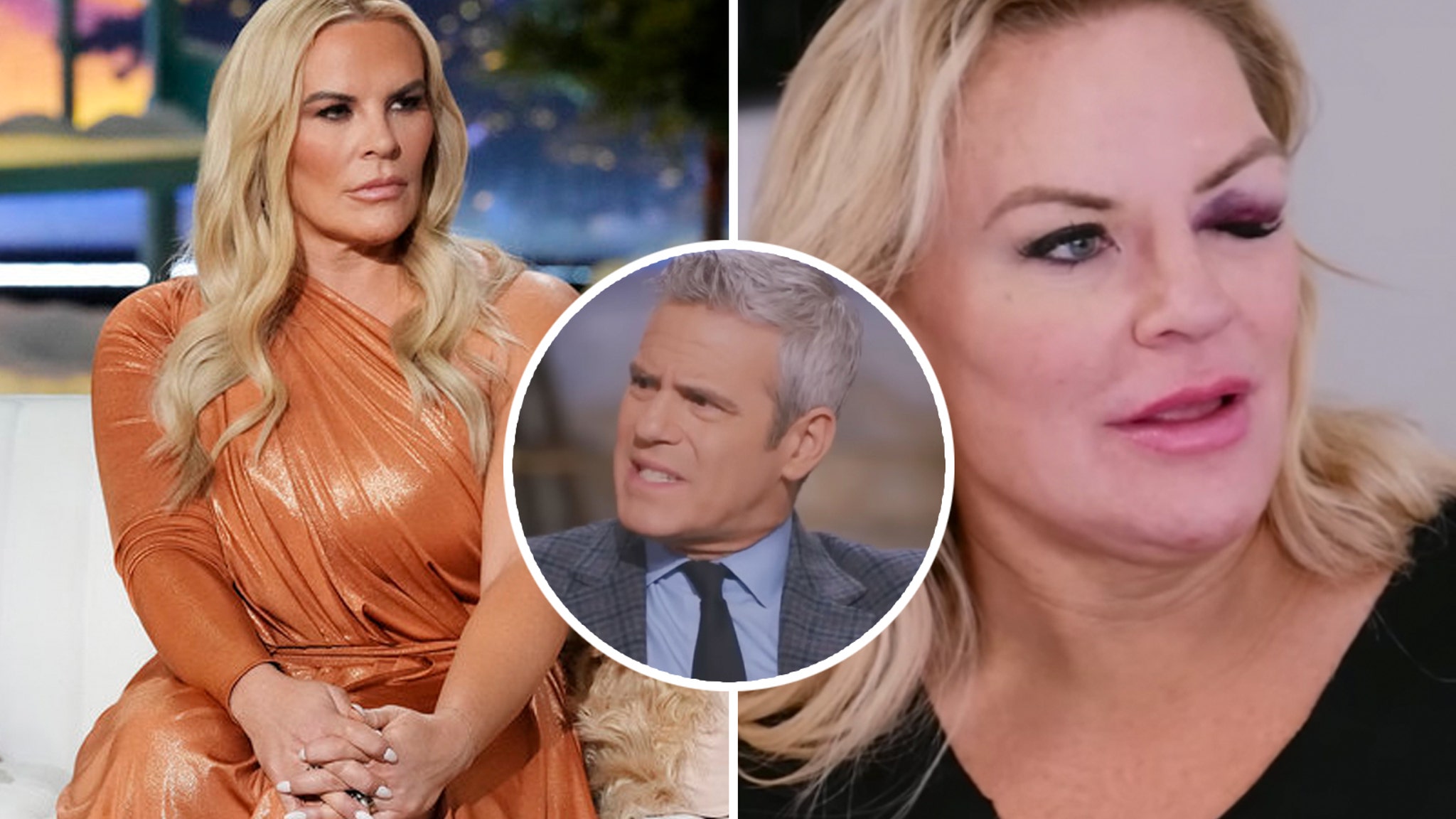 “Do you think Jen punched you in the eye?” asked Cohen as Heather finally offered up some answers.

Heather Gay and her black eye were in the hot seat during Part 1 of the “Real Housewives of Salt Lake City” reunion.

After a wild night of drinking in the final few episodes of the season, Gay dramatically revealed she woke up with a black eye and scratches all over her body. She wouldn’t explain what happened though, infuriating both her costars and the audience watching at home as the subject kept coming up with no resolution.

See her big reveal to Jen Shah — who some speculated was actually behind the injury based on their interactions with each other and Heather’s lack of information — below.

When asked about it during the reunion, Gay simply said she “blacked out” and didn’t know what happened.

“I wish you had said that in the moment because it caused so much damage,” Lisa Barlow responded, revealing that an investigation was actually launched into the injury by production.

“There was an investigation that didn’t find anything,” Cohen confirmed, “and there was no additional footage, by the way, or else it would have been shown.”

Explaining she “woke up terrified,” Heather said she insinuated to others that she knew what happened during filming because she was “scared that they would rewrite the narrative” if she didn’t. “If I said I didn’t know, they could say anything they wanted and I was afraid,” she added.

Barlow pushed back again, saying she should have been more forthcoming at the time because her lack of transparency “impacted people that were on production that were up late with us and then it makes it look like they did it to you.”

After she said that as an ex-Mormon she has a lot of “shame” when it comes to drinking, Cohen noted that it looked like she had been “assaulted.”

“I woke up in a very very high stress situation with so much shame and humiliation, there was no way to hide it. I went to my thing, which is just humor, to make it go away. And it didn’t go away,” she continued. “I certainly do not want to implicate anyone here, anyone on production, it’s my own guilt and shame about blacking out and not being able to explain it.”

She said that after speaking with attorneys, she welcomed the investigation “to rule out that I had not been assaulted.” As for why she first revealed the black eye to Jen before the other women in the cast, she said she “trusted her the most … for coming up with a cover story when you black out and have a black eye.”

After Whitney Rose said that, based off their interactions with each other, it “really seemed” like Heather and Jen “got into an altercation,” Andy asked Heather if she ever flat out asked Jen if she “did this to me.”

“I think we joked about it. But it wasn’t about that. I would have rather have Jen do that to me than a stranger,” said Heather in response.

“Do you think Jen punched you in the eye?” Andy then asked. “I don’t know. That’s why I didn’t want to have these questions, because I don’t know. I blacked out,” she replied.

He kept the same line of questioning going, stating, “So you don’t know if she punched you in the eye.” Heather said she couldn’t speak to anything “other than I walked into my room and I blacked out.”

Cohen also wondered if part of her thought, “If [Jen] did do this, I want to cover it up so that she isn’t penalized in any greater way in by a judge or in her case?” — echoing some fan speculation that Heather kept quiet to protect Jen in some way.

“If I knew Jen did that, I would cover it up. But that was not my intention. I was blacked out,” Heather stated. “I thought somebody here knows. It was a horrible black eye that took 10 days. It did not look like a fall into a door knob, we didn’t even have door knobs. Anything could have happened and I assumed that when I was on a show with cameras and cast, that somebody would give me the trigger that would make me remember and I still don’t know. I still don’t know how I got it.”

The other women then shared what they believe happened.

“I believed she had an accident and didn’t remember, she blacked out. Or Jen hit her,” said Whitney. “I thought maybe she tripped and fell,” said Angie K, before explaining why she thought it had something to do with Jen too.

“Jen was very off and not present the next day. She was very quiet, to herself, she was on the phone a lot,” she added. “And then production asked Heather at the Greek dinner what happened to your eye, Jen looked at her quietly and said, ‘What are you going to say happened?’ And that gave me a dark feeling that there was something that they knew that they were not sharing with the rest of the group.”

Danna Bui-Negrete thought she likely took an accidental elbow to the face, before Cohen closed out the episode by bringing up Angie’s speculation that it could have happened during a sexual tryst between Gay and Shah.

The episode ended with Angie saying, “I was talking to some people and they said, have you ever heard of any sexual relations between Heather and Jen.”

The RHOSLC reunion continues next Wednesday on Bravo.