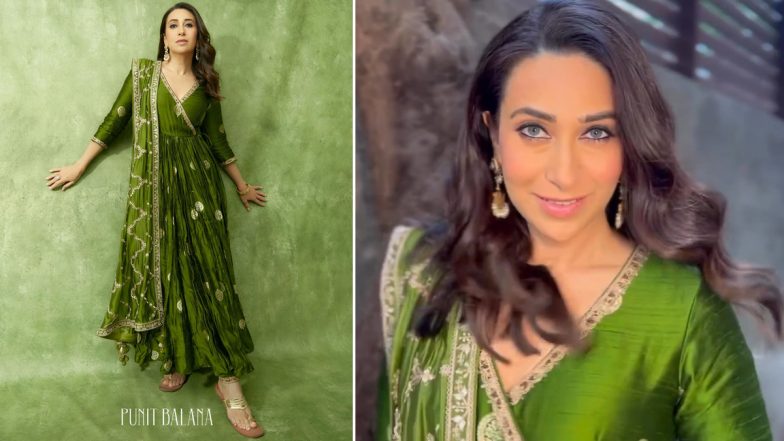 Karisma Kapoor is returning to acting with yet another digital venture titled Brown. The upcoming noir drama was the only Indian web show that was a part of Berlin Market Selects 2023. After starring in Mentalhood on ZEE5, this would be Kapoor’s next attempt in the web space. Besides her acting commitments, Karisma was also spotted attending a store launch event in the city recently. And her pickle green Anarkali that she had worn for the event instantly grabbed our attention. Fashion Faceoff: Deepika Padukone or Karisma Kapoor, Whose Black Sabyasachi Saree Did You Like More?

After doing our research we found out that Karisma’s Anarkali belonged to the house of Punit Balana. Yes, the outfit is available on the designer’s website but get ready to pay a hefty amount for it. The outfit is currently priced at Rs 75,000 and we personally believe it’s a bit too much. Coming to the detailing of the outfit, it is a classic Anarkali embellished with marodi work and heavy dupatta and is also paired with a churidaar. Karisma Kapoor Birthday: A Quintessential Diva Who Does Fashion Like No One Else (View Pics)

Speaking about her accessories, Karisma further opted for a pair of statement earrings to go with her attire. With blushed cheeks, curled eyelashes, well-defined brows, glossy lips and hair styled in soft waves, she completed her look further. While we were certainly mesmerised by her look, what are your thoughts about it?

(The above story first appeared on LatestLY on Jan 25, 2023 12:00 PM IST. For more news and updates on politics, world, sports, entertainment and lifestyle, log on to our website wmleader.com).