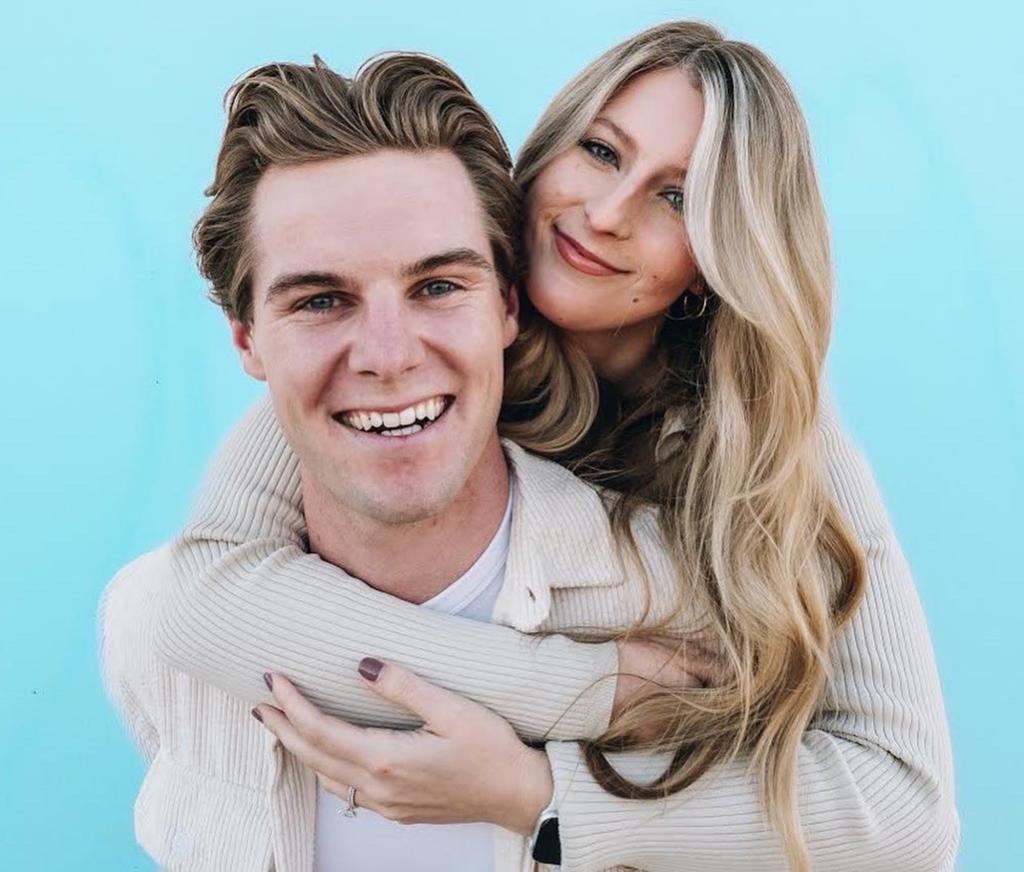 Preparing a lavish charcuterie board for girl’s-night noshing and dishing about the hottest heartthrobs on “Gilmore Girls” are a just few of Hunter Leopard’s favorite things — mainly because they’re some of his wife Maya’s most treasured pastimes.

In fact, Hunter, 24, a law student who was captain of his high-school football team, is a husband who considers himself “one of the girls“— a term that describes heterosexual men who readily dote on their wives by catering to their every whim out of love and adoration.

And he was happy to hang up his helmet in exchange for a hot pink chef’s hat to bake cookies in if it means putting a smile on his bride’s face.

“As a man, taking an interest in my wife’s life and the things she’s interested in is important to the health of our relationship,” Hunter, who lives in Orange County, Calif., told The Post.

He and Maya, 25, began dating as high school sophomores in their hometown just outside of Los Angeles, at age 15. The towheaded twosome tied the knot in July 2021.

And as an altruistic spouse, unencumbered by traditional gender mores, Hunter does everything for Maya, including making her chocolate chip pancakes for breakfast while she sleeps in, applying her makeup, doing her hair while she eats, joining her in glittery arts & crafts and walking her through his multi-step, nighttime skincare routine.

“I don’t mind being considered ‘one of the girls’ in my marriage,” he added. “I’m secure enough in my masculinity to be able to have fun, let loose and enjoy things with my wife and her friends.”

And Hunter isn’t alone when it comes to fulfilling his queen’s every desire.

On TikTok, where the hashtag #HesOneOfTheGirls is trending with nearly one million views. Brooklyn Beckham, 23, is being hailed the king of the selfless husbands for his exemplary treatment of wife Nicola Peltz, 28.

Candid photos of Beckham donning a white and pink apron, reading, “At your service, girls,” as he prepares snacks for his wife and her gal pals have trended online. Shots of him helping Nicola apply fake finger nails, as well as pics of him snapping Instagram-worthy frames of her and “Only Murders in the Building” starring bestie, Selena Gomez, have also made big impressions on social media.

Most notably, after getting hitched in April 2022, the son of British icons Victoria and David Beckham took his wife last name, making him Brooklyn Peltz Beckham. “Not many guys take their wives’ names. So, I was just like, ‘Why not?’ It fit really cool together,” he told E! of his new surname in August.

And social media’s loved him for all of it.

“Brooklyn Peltz Beckham is such a ‘one of the girls’ type of husband,” gushed gossip vlogger @AmandaChristine_1 in a clip about the buzzy hubby genre. “He’s always there for girl’s night as an active participant.”

And other women are taking to social media to showcase their guys as they proudly live up to the title.

Mom of three Vanessa Cossio employed the hashtag #CoupleGoals on a clip in which she dubs husband Ryan “one of the girls” as they laugh about their shared penchant for swapping gossip.

Wife Christina Baxter went viral on a post featuring her man, front and center, making a silly dance video with her and three girlfriends during a “girls night” gathering.

And a woman named Nicki praised her “gem” of a groom for crafting a wine and cheese snack board, cleaning up the house and making up the beds for a girlfriend’s sleepover event.

Hunter’s no stranger to tackling all of the above.

In November, for Maya’s 25th birthday, he hosted a surprise soirée complete with pink streamers, balloons and rose petals, and invited all of her bridesmaids from their 2021 nuptials to their house for a pajama party. During the fab fete he donned all-pink attire — including a salmon-colored bow tie with his tuxedo to serve up cocktails, a rosy toque for “make your own pizza” fun and blush PJs for girl talk and selfies before bed.

Maya loved every minute of it.

“That party was beyond my wildest dreams,” she told The Post. “My friends loved it, too.”

“But honestly, they’re used to Hunter doing big and little things like this for me because he’s always treated this way, every day,” she added.

However, while the ladies love his attentive affection, digital haters often berate Hunter, calling him “soft,” “whipped” and “gay” — a term he’s not offended by, but feels inaccurately represents his sexual orientation — for his many grand gestures.

But he’s not letting the cloudburst of shade rain on his and Maya’s parade.

“I get a lot of negative feedback from men, and it saddens me,” he said. “But doing things that make my wife happy makes me happy.”