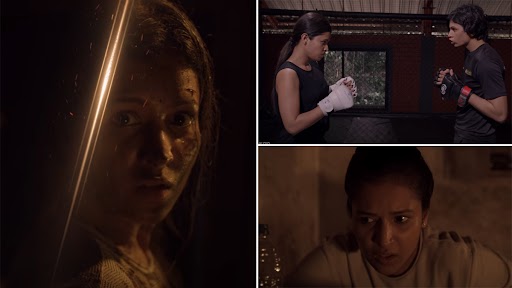 Ashwini Puneeth Rajkumar launched the teaser of the Kannada film Juliet 2 with Brinda Acharya in the lead at an event here.The movie showcases the story of an independent woman (Juliet), who is very close to her father. Being a devoted and caring daughter, she wants to fulfil her father’s dreams. Puneeth Rajkumar Conferred Karnataka Ratna Posthumously; Rajinikanth, Jr NTR Attend the Award Ceremony (View Pics).

One night, she witnesses a dreadful incident that reconnects her to her own past traumas.The story revolves around the chaotic circle of vengeful attacks.Will Juliet be able to prevail over the brutality behind those darkest doors? Producer Likith R Kotian, director Virat B Gowda, and Brinda Acharya as well as her co-star, Srikanth Roy Badiger, were present at the launch event. Fatima: Jaya Prada Makes an Acting Comeback With MX Player Series About a Mother Who Goes After Her Daughter’s Rapists

Check The Teaser Of Juliet 2

The movie is all set to be released this February and the distribution rights are with Reliance Entertainment Studios.

(The above story first appeared on LatestLY on Jan 25, 2023 01:08 PM IST. For more news and updates on politics, world, sports, entertainment and lifestyle, log on to our website wmleader.com).