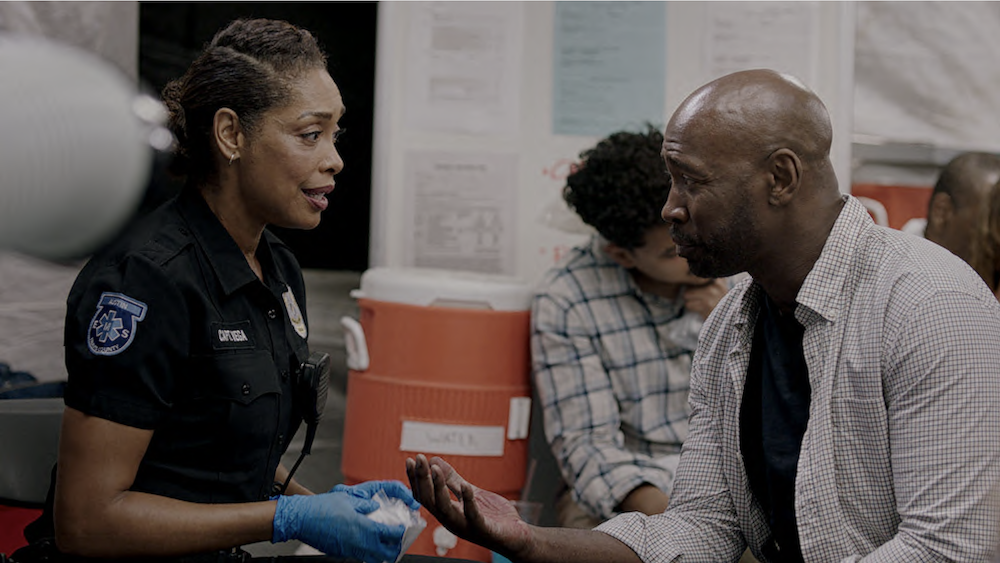 Oh, lord. The fourth season premiere of Fox’s “9-1-1” spinoff “Lone Star” began with a spark igniting between Tommy Vega (Gina Torres) and one of the 126’s latest rescues, Trevor Parks (series newcomer D.B. Woodside), and ended with Tommy being surrounded by hellfire as she found out her new crush is also her new reverend.

“You can’t just go out and have drinks and get sloppy with the pastor,” Torres tells WmLeader of the chief paramedic’s realization that the first man she’s been truly interested in since her husband Charles died isn’t a good candidate for a casual fling.

“She’s a grown woman that understands relationships and has been in relationships,” Torres says. “Charles was not her first and she’s very clear that he’s not going to be her last. But what does that look like? Really, what does that look like for a woman that maybe doesn’t have as strong of faith — not that she’s weak on faith, but just in terms of being with a pastor, that’s a whole other level. Let me just be clear on that. She’s a hedonist in a lot of ways. She’s a lovable heathen.”

While “Lone Star” explored a small bit of Tommy’s desire to remain a sexual being as she began to recover from her husband’s passing in Season 3, Torres was excited to really dive into that storyline in full in Season 4 with the addition of Woodside to the Fox drama’s cast.

“That was always the question, how long will she be in mourning?” Torres says. “And her — let’s call it her awakening last season, as ill-advised as it might have been, it was certainly a milestone in that, here she is opening herself up to the possibility. And I think her intention was to just dip a toe. She’s still very much alive, she’s very much viable and sexy and attractive and she knows that her life isn’t over. And so what does that mean and what does that look like? I was very much on board with slowly introducing somebody who might be interesting, who might be the fit, which I think is very realistic. You go in thinking, well, I’ve already had one love of my life, I don’t want to be selfish. And that’s kind of where her heart is — I don’t expect to have another love of my life. At that point, you’re thinking I want to have a good time, I want companionship. I want somebody that’s a peer, that’s a contemporary, that I can laugh at the same things with and that’s where she is. She’s certainly not looking for anything serious.”

Elsewhere in the premiere, Tommy’s righthand, T.K. Strand (Ronen Rubinstein), and Austin police officer Carlos Reyes (Rafael Silva) are finally engaged and planning their wedding. While Torres says Tommy is very happy for the newly betrothed couple, based on the mess they get into in the premiere — T.K. finds out Carlos is married to his long lost friend Iris (Lyndsy Fonseca) and needs to get a divorce before they can wed — Tommy is going to stay out of wedding planning.

“Oh, I’m staying far, far away from that,” Torres said. “Tommy is a beloved guest. No, no, there are already so many chefs in that kitchen, which the audience will have a lot of fun with.”