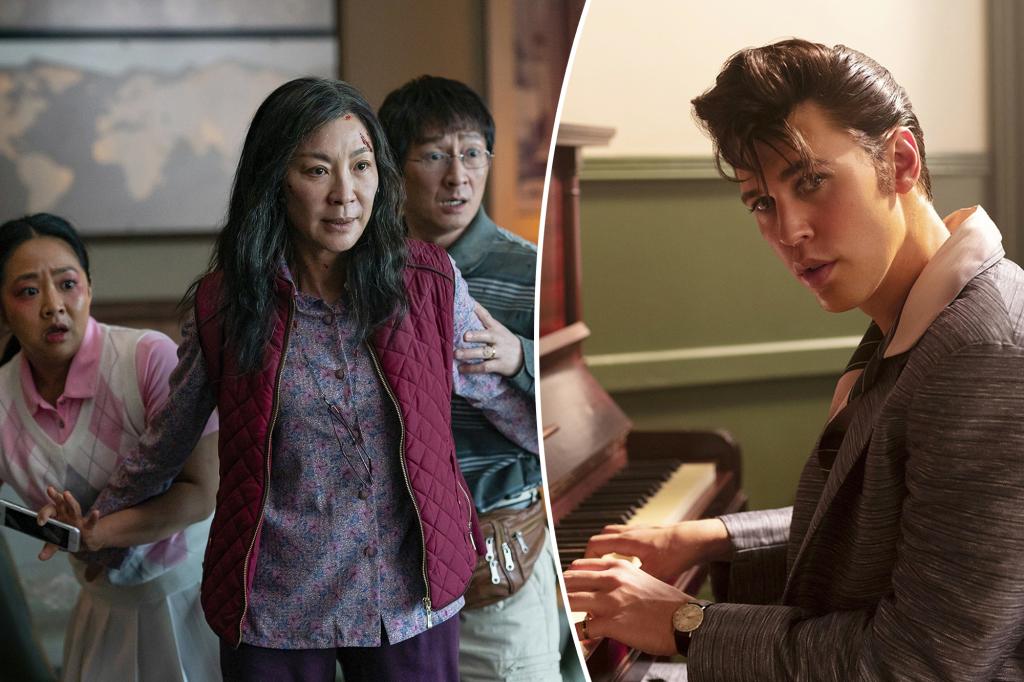 The chase for Oscars gold is officially on.

The 2023 Academy Award nominations were announced Tuesday, with several notable contenders vying for statuettes on March 12.

“Everything Everywhere All at Once” leads with 11 nominations, while the Irish drama “The Banshees of Inisherin” scored nine nods.

“Everything Everywhere All at Once” star Michelle Yeoh is the first Asian actor nominated for best actress.

Several stars had sweet reactions to earning a place on the Oscars list Tuesday.

Best Actor in a Leading Role for “The Banshees of Inisherin”

“Just so grateful to the Academy for all the love it’s shared with the ‘Banshees’ cast and crew. Also, beyond honored to be lumped together with my fellow nominees. A heartfelt congratulations to all the lads,” he said in a statement to the Post.

Best Actor in a Supporting Role for “The Banshees of Inisherin”

“What an amazing wake-up call! I’m so proud and grateful to be part of ‘The Banshees of Inisherin’ on a personal and professional level,” Gleeson said in a statement. “I’m absolutely thrilled for the whole brilliant cast and everyone at home. What a day for the Irish film industry on a world stage! Feels like a huge family outing on the cards! Thank you, Academy. Thank you, Martin [McDonagh]! Thank you all!”

Best Actress in a Leading Role For “To Leslie”

“I’m astounded,” Riseborough told Deadline. “It’s such an unexpected ray of light. It was so hard to believe it might ever happen because we really hadn’t been in the running for anything else. Even though we had a lot of support, the idea it might actually happen seemed so far away.”

“The first is the moment of hearing my name, and then the thrill of my friend, Stephanie Hsu’s name, and the rest of the nominations, and then the best thing of all, a loving embrace for my husband. No filters. No fakery. Just the truth of a moment of joy,” Curtis added.

Speaking to Today, he gushed: “I’m jumping up and down, and I’m screaming so loud!”

Best Actor in a Leading Role for “Aftersun”

“This is truly a special moment for everyone involved in ‘Aftersun,’” Mescal said in a statement via People. “To be recognized by the Academy is such an insane honor, and I’m so utterly grateful. I want to dedicate this nomination to my two friends, Charlotte and Frankie, who I love dearly! This is bananas, thank you!”

She told the Hollywood Reporter: “It’s taken a long time. But I think this is more than me. At the present moment, constantly, all the time, having Asians walking up to me saying, ‘You can do it, you’re doing it for us.’ It’s like, ‘I understand. I totally understand.’ All this time, they’ve not been recognized, they’ve not been heard.”

She continued, “I’ve been in the movie business now for 40 years. When you have validation from your peers, all that is like the cherry on the cake… I think this is beyond just me. It represents so many who have hoped to be seen in this way, to have a seat at the table, to say, ‘I am of value too, I need to be seen too.’”

Producer of “Top Gun: Maverick,” which was nominated for six Oscars including Best Picture

The filmmaker said in a statement: “I’ve been doing this a long time, and it finally got around to me. We brought an older audience back to theaters who hadn’t been going.”

“They certainly deserve [to be nominated],” Bruckheimer continued. “Tom [Cruise] willed this into existence. He’s the heartbeat of the movie.”

“This morning is a little extra special in the Bassett/Vance household with news of my Oscar nomination,” she told E!.

“Ramonda is a love letter that reflects and acknowledges what we women do everyday. There was so much to unpack as an actress because it’s brilliant storytelling, alongside a wealth of talent in front of and behind the camera.”

She added, “I’m thankful to the Academy for including me amongst a wonderful group of actresses. Congratulations to my fellow ‘Wakanda Forever’ nominees…I look forward to March 12 as we cheer for and celebrate with one another.”

Best Actor in a Leading Role for “The Whale”

“I’m absolutely overjoyed and deeply grateful to The Academy for this recognition and for recognizing Hong Chau’s beautiful performance and Adrien Morot’s incredible makeup,” he noted. “I wouldn’t have this nomination without Darren Aronofsky, Samuel D. Hunter, A24 and the extraordinary cast and crew who gave me the gift of Charlie. A gift I certainly didn’t see coming, but it’s one that has profoundly changed my life. THANK YOU!”

Best Actress in a Supporting Role for “The Whale”

“l am overjoyed by this morning’s news,” Chau stated. “Being a part of this film was an unforgettable experience, and I share this nomination with the creative and talented people alongside whom I worked on this project.”

She continued: “And a big congrats to Brendan, my co-star and dear friend, as well as our amazing hair and makeup team on their nominations this morning. Thank you so much to the Academy for this recognition and a special thank you to Darren, A24, and the entire cast and crew of ‘The Whale.’”

The Mexican filmmaker said in a statement: “We are so grateful to the Academy and honored that the medium of animation is accepted for the art form that it truly is. We made this film to reaffirm what it means to be human and to share a fable about life, love and loss. We thank all of our collaborators, our amazing cast and dedicated family of crew & animators who have painstakingly given their all throughout the many years it took to bring our Pinocchio to life.”

Best Actor in a Supporting Role for “The Fabelmans.”

“In truth, I am surprised, humbled and thankful to be deserving of such an honor,” he said. “And Steven Spielberg … what can I say.”

Best Actor in a Leading Role for “Elvis”

“[This role] seemed as though it was this impossible mountain to climb in front of me,” Butler explained to The Hollywood Reporter.

“There were so many pitfalls, and so I just was focusing on one step at a time. And really the thing for me was just honoring the life of this man and his family,” he told the outlet.

He also added that he wished the late Lisa Marie Presley, who died Jan. 12, was still alive to celebrate with him.

“And that’s why those moments when Lisa Marie and Priscilla [Presley] got to see the film, and then I first saw them after… nothing I would do would ever top that. And especially with Lisa Marie not being here with us. I just wish she was here to celebrate today with us,” he said.

Best Actor in a Supporting Role for “Causeway”

“I am beyond honored to be nominated!!!!! And in such amazing company!!! I’m so grateful,” Henry said in a statement to CNN, adding that he heard the news while standing in an elevator. “And to the random man in the elevator who saw me scream at the news, thank you for hugging me and not freaking out!!!!!!”